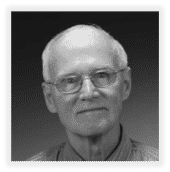 A tour of service as a Naval Flight Surgeon positioned him on Whidbey Island, Washington, and this introduction to the Pacific Northwest ultimately proved irresistible. Following naval service, he received postgraduate training in internal medicine in Philadelphia at the Pennsylvania Hospital and then he pursued a fellowship in hematology and oncology at the University of Washington.

His career in medical oncology was at the Tumor Institute of the Swedish Hospital in Seattle where his practice focused largely on the treatment of patients experiencing lung, breast, colon, and genitourinary cancer and malignant lymphoma.

Toward the end of his career he developed a particular concentration on the treatment of prostate cancer. Since retirement in 2002 he has authored the PCa Commentary, published by the Prostate Cancer Treatment Research Foundation, an analysis of new developments in the prostate cancer field with essays discussing and evaluating treatment management options in this disease. He is a regular speaker at various prostate cancer support groups around Seattle.