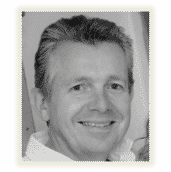 Prof. Stephen Langley is a Consultant Urological Surgeon at the Royal Surrey County Hospital and the St Luke’s Cancer Centre in Guildford.  He became a Consultant in 1998 and then after 6 years he was appointed as Professor of Urology at the Post Graduate Medical School of the University of Surrey, where he co-leads a major research program in the field of prostate cancer

He was educated at St Paul’s School London before studying medicine at St Bartholomew’s Medical School, London. He graduated with honours in 1988 and then began his surgical training.  In 1996 he passed his Specialist Consultant exams in Urology in which he was awarded the Keith Yates Gold medal for outstanding performance.

In 2012 he published and presented the technique of 4D Brachytherapy, a novel method to perform prostate brachytherapy using both stranded and loose seeds in a one-stage procedure with real-time dosimetry.  This technique delivers an improved radiation dose to the prostate whist reducing the side effects compared to earlier techniques. 4D Brachytherapy is quick to perform, reducing the anesthetic time and allowing patients a quicker recovery.

His passion to improve the care for prostate cancer patients led him in 2003 to invent the technique of prostate template biopsy. This new method allows the surgeon to diagnose and monitor cancerous changes within the prostate in a more detailed and specific way. This technique developed in Guildford, has been NICE approved and is now used throughout Europe.

Professor Langley is a pioneering clinician and in recent years he has trained as a robotic surgeon.  He uses a Da Vinci robot to surgically remove cancerous prostate glands from patients as another tool in his armamentarium to treat prostate cancer patients.

He is the Chairman of the UK Prostate Brachytherapy Advisory Group and sits on the Department of Health’s Prostate Cancer Advisory Group, influencing national policy.  In 2005 he received Karl Stortz Golden Cystoscope awarded from the British Association of Urological Surgeons for an outstanding contribution to British Urology.  In 2013 he was received a Silver Clinical Excellence award.

He is married with a 9 years old daughter.  His interests outside of medicine include rugby, boating and sailing. He is a qualified Yachtmaster and likes to spend most of spare his time afloat in the Caribbean and Mediterranean waters.